Ok its is an open forum to clown me in the feature image picture and yes I am playing Atari.  I am not new to this I am true to this lol.  This week’s game will be Mike Tyson’s Punch-out.  For those of you that got the Nintendo growing up know that this game has be remastered and remade over the years, but the one with Mike Tyson was released at the height of Tyson’s career in boxing. 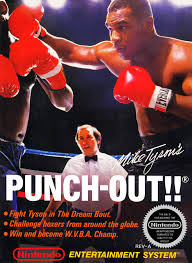 The game was developed in 1987.  It was ahead of its time with its own “Career” mode.  You played as Little Mac and tried to make your way up through the world rankings.  Little Mac was so short compared to his opponents, but he packed a powerful punch.  Each opponent had a special way they could be knocked down or beaten, but you had to use word of mouth or figure it out.  Like the big Butterbean looking dude, think his name was like King Hippo that had the taped X on his stomach you had to wait for him to lift his arm up and expose his stomach and you would just spam the  low punch button, but if he hit you it took so much power.

Those were the days before YouTube when you had to figure out how to beat certain bosses through world of mouth or trial and error.  I think my favorite character was Don Flamenco because he took 3 days to fall when you knocked him out.

The game would have a midway point where you would get a cut scene with you and your trainer. He would be riding a bike and Little Mac would be running behind and on the screen a save key would appear.  You would need to write that down so when you turn the game back on you could enter that key and return back to your spot.

In total I think it was about 14 boxers and at the end you would fight Iron Mike Tyson.  If one of his punches hit you it was a wrap.  You had to make sure you predicted and avoided his punches and counter-punch him quickly at the end he would give a quick message about how fast your finger speed was lol.

Mike Tyson’s Punch-out is a game I definitely remember playing more than enough over and over growing up with my family and friends.  Please check out the stream below from Militia Gaming League if you want to take a look at the game they always have the hot games on Retro Gaming Wednesdays.

we will be playing Mike Tyson's Punch-Out that was available on the Nintendo NES platform in 1987.

Check it out Live at 8pm EST on our twitch: https://t.co/IxQSbbeQEi pic.twitter.com/KPHtkKfFvC